You Look Weird To Me [Eleanor Forte]

This is my first vocal synth original song (this is why it’s pretty bad). There’s an interesting story behind it:
I had a dream some time ago:
I was watching my favourite music videos from the 80s (I remember some songs by Depeche Mode and A-ha). Then, there was a song I don’t know (and I didn’t even know the singer). The song was called “You Look Weird (To Me)”. The song was so awesome, so I tried to remember some parts of it and make it real. I didn’t know who will sing it, I thought I’ll sing it myself.
But then, a tech preview of a very easy-to-use vocal synth was released: Synthesizer V!
I thought: “I still remember that song ‘You Look Weird (To Me)’. That would be a really cool vocal synth original!”
So here’s the song:

The old version with terrible instrumental and pretty bad tuning (made with the tech preview), listen at your own risk…

The PV version with new instrumental, sung by the current version of Synth V (with upgraded E. Forte voicebank). 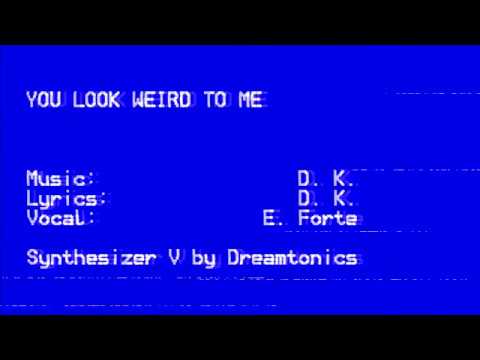